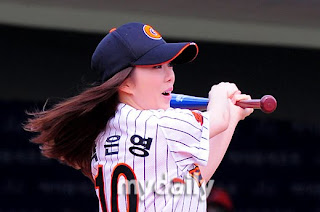 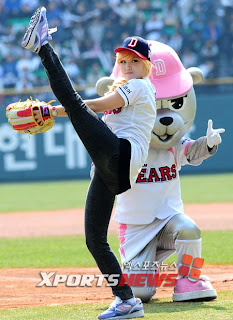 While Secret's Hyo-sung threw out the first pitch before the game at Jamsil Stadium on Sunday.

The LG offense consisted of twelve hits(all singles) four walks and one HBP. Everything came at the right time for this team. Right fielder Jeong Eui-yoon led the charge by going 4-5 with two RBIs and a run scored.

Doosan starter Lee Hye-chan was really, really wild. He only stuck around for 3 2/3 innings, but he managed to walk four and hit a batter.

SK starter Jim Magrane made his regular season debut and it was completely forgettable. Magrane was chased from the game in the third inning and was charged with all three Nexen runs. He needed 49 pitches(34 strikes) to record six outs. He gave up five hits, but struck out three.

The game was locked up at three until the bottom of the eighth inning. SK DH Park Jae-hong lead off with a broken bat single and was lifted for a pinch runner. Third baseman Choi Jeong got the runner to second with a sac bunt. Center fielder Kim Kang-min drew a walk and catcher Jeong Sang-ho hit his second double of the day to score both runs and give SK a 5-3 lead.

SK reliever Jeon Byeong-doo recorded the final six outs for the save. He walked two and struck out one.

This was a wild affair.

KIA pounded the tar out of Samsung starter Ken Kadokura. By the time the dust settled, Kadokura was pulled from the game after the second inning and gave up eight runs on five hits and two walks. A throwing error by Samsung shortstop Kim Sang-su started the rally and Kadokura couldn't do anything to keep KIA from circling the bases. The rally was capped by a grand slam from 2009 MVP Kim Sang-hyeon.

Samsung battled back with a solo homer from first baseman Chae Tae-in and a six-run rally of their own in the sixth inning. During the rally, KIA reliever Yang Hyeon-jong walked three straight batters with the bases loaded before giving up a seeing-eye single to third baseman Park Seok-min to tie te game at eight.

KIA third baseman Lee Beom-ho hit a solo homer in the seventh inning to un-tie the game and give KIA a 9-8 lead.

KIA closer Yoo Dong-hoon recored a four out save to nail down the W for the Tigers.

Lotte couldn't get much going against Hanhwa pitching. It's been a while since anyone has been able to write that about any Hanhwa pitcher other than Ryu Hyeon-jin. Hanhwa starter Ahn Seung-min threw five innings(80 pitches, 55 strikes) of one run ball. He gave up only five hits and two walks while striking out four.

Lee Dae-ho blasted his second homer in as many days in the third inning off of Ahn.

To the surprise of dozens, the Hanhwa bullpen was able to hold a lead for four innings. Wonders never cease. Oneli Perez recorded a five out save and struck out three, but he also walked a pair.

After Lee's homer in the third inning, Hanhwa tied the game in the fourth on a sac fly from left fielder Choi Jin-haeng. Shortstop Lee Dae-su hit a solo homer in the fifth to give Hanhwa the lead and Choi gave them a little insurance with a solo homer in the sixth.
Posted by Rodney from Pilsen at 12:45 PM

Email ThisBlogThis!Share to TwitterShare to FacebookShare to Pinterest
Labels: Roundup

Gotta love a closers welcome to the KBO; first time we call your name hey go get 5 outs, on the road in Sajik. Get used to it Oneli! He looked sharp (enough) though. Can't wait for Lee Beom-ho's return to Daejeon tomorrow...

And Choi Jin-heng starts his quiet home run campaign, none of the Korean sports media wants to recognize this guy..

Crazy games again in the KBO.. one of the best sports leagues in the world, just concentrated awesomeness.

So it looks like Lee Beom Ho is getting his stride back. I hate to see KBO stars go to Japan, do poorly or mediocre, and then come back and do well again. I wonder what this says about the pitching in Japan vs Korea.

Well, Japan being more of a baseball culture, with more teams, more money, a much longer history, more money, well developed high school and amateur leagues so a bigger well of more skilled players, and more money... of course they are on average superior to Korea. Which is why the Korean national teams successes on the international level (and specifically against japan) are even more awesome.

Just fyi... Park Eun-young is a KBS announcer, not an actress. I talked to her before the game, and got some nice pics. Cute girl.

Oh yea, the game was fun too!

A foreign perspective on baseball in Korea.

January 2, 2014
This long dormant blog has been revived as a straight word for word translation blog. I am no longer in Korea and can't follow the league as closely as I would like. And the main man Matt is off pursuing other endevors.
Happy reading! Countdown to the 2014 season starts now!!